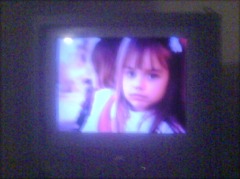 A group of parents in B.C. are adamantly opposed to the Burnaby school district enacting an LGBT-inclusive anti-bullying policy.  Catholic school districts in Ontario want to ban rainbows and Gay-Straight Alliances.  Charles Adler is worried that a calendar that is a teachers’ reference (and notes the Transgender Day of Remembrance) might cause kids to become “transgender hookers,” and Charles McVety is warning that teaching students that trans youth exist will confuse them about their gender.  After the National Post apologized for McVety’s ad, the Toronto Sun ran it to make a point about free speech, and it’s now running in video form on SunTV.  McVety’s contention that LGBT-inclusive and -positive sex education “is truly sexually violating little boys and girls” is now being repeated (with nicer wording) as the conclusion of National Post columnists.  Teach kids to coexist with gay and trans kids?  You can’t do that.

Teach them to march in anti-abortion protests?  Sure, why not?

According to the Winnipeg Free Press, students are being given full credits for doing so, and principal David Hood is considering making it an official school activity.

Christ the King School is a private Catholic school in St. Vital, Manitoba providing instruction to students ranging from kindergarten to Grade 8.  It’s a funded independent school, which means that it receives 50% of student tuition from the Province.  The instructor who initiated the action was inspired by Campaign Life Coalition, a Canadian anti-abortion lobby which has of late reversed the trend and started exporting tactics and rhetoric to the U.S. (via their LifeSiteNews website, for example).

The abortion debate has derailed U.S. economic policy, with a record 162 pieces of anti-abortion legislation passed in the first half of 2011 alone.  Although the public is largely unaware of it, womens’ health “Title X” funding was the central sticking point that Republicans were almost willing to shut down government and bankrupt the country over.  Politicians have become so emboldened that some have gone to the next step and openly declared a “war on birth control.”

In Canada, there have been renewed efforts to eliminate all funding for International Planned Parenthood, even for womens’ health initiatives in countries where abortion is banned.  The United Way similarly came under fire for womens’ health support and some Canadian hairstylists reportedly participated in a campaign to discuss pro-life beliefs with customers.  Prime Minister Stephen Harper stated during the election that he wasn’t interested in reopening the debate about abortion.  But he doesn’t have to, and Canadians no longer have that luxury.

Meanwhile, the Canadian Centre for Bio-Ethical Reform has been picketing schools of all levels through southern and central Alberta & B.C. with graphic signs, because it’s apparently healthy for elementary students to see gory pictures of fetuses, while learning about gender identity is considered child abuse.  It’s becoming increasingly obvious that the debates over anti-bullying and sex education are less about “confusing kids” and more about ensuring that public monies teach far right ideology.

(crossposted to rabble.ca and The Bilerico Project)

2 thoughts on “Learn about gay and trans kids? No. Have them protest abortion? Okay.”

Exploring political and human rights issues, how to unite the left, and more. Mercedes Allen and guests.